You are here: Home1 / News2 / Odd News3 / Lobster found with Pepsi can tattoo in claw: Fuels worry for ocean pol...

Man’s worry over ocean pollution struck a new concern this week when a Canadian fishing crew found a lobster with a blue and red Pepsi can tattoo on its claw. Trapped in the waters of the Grand Manan, New Brunswick, the lobster had been banded and loaded into a crate when spotted by crew member, Karissa Lindstrand.

According to the CBCNews, Lindstrand is a 12-pack-a-day consumer of Pepsi and had never seen anything like it before:

“I was like, ‘Oh that’s a Pepsi can. It looked like it was a print put right on the lobster claw,'” Lindstrand stated.

And so the debate began, although there has not been any definitive answer except to what one may logically conclude. Some think the lobster might have grown around a can that ended up on the ocean floor. Another speculation might have been that part of a Pepsi box became stuck on the lobster. Lindstrand, however disputes those theories stating the image on the claw was pixelated, and it could not have come from a can nor a Pepsi box. It is concerning, and it is the first time in her four years of lobster fishing that Lindstrand has ever seen “garbage imprinted on an animal.”

Nevertheless, experts are drawing more concerns about the amount of trash being dumped into our oceans. It’s also a first for Matthew Abbott, Fundy baykeeper and marine program co-ordinator at the Conservation Council of New Brunswick.

“This is really a unique instance,” Abbott said. “I haven’t seen something like it before, of such a clear imprint of a can on a marine animal.”

Where ever this lobster lived, there was obviously trash lying around, which easily translates into seabirds, fish and other ocean denizens ingesting the pollutants dumped into our oceans. Tons of plastics leak into our oceans annually and even though they break down, they don’t go away. When small enough, the pieces are eaten by sea life or entangles them; bringing about their premature deaths.

Sadly there haven’t been any solutions; man continues to pollute every part of the environment and yet some deny a growing problem preserving the planet we all share. According to the Guardian, researchers state more than 18 tons of plastics have washed up in one of the world’s most remote areas – an uninhabited coral atoll in the eastern South Pacific. Scientists found crabs living in makeshift homes made of bottle caps and plastic jars.

As for the Pepsi lobster, it was sold and could possibly have been shipped to Boston by now. The captain said he tried to track the lobster down in order to display him at a local restaurant next to another rare lobster, but no luck.  We are sad for the lobster, but man’s greed and lack of humanity seems to have few boundaries.

(Photo of lobster with Pepsi can tattoo screenshot via Karissa Lindstrand) 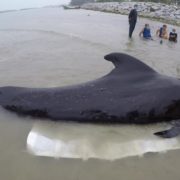 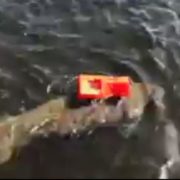