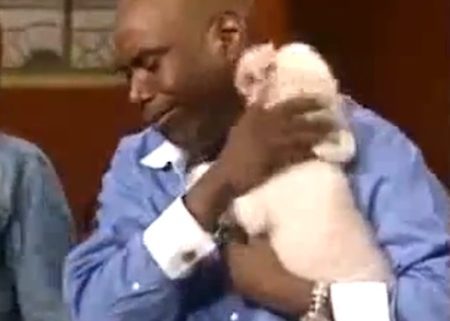 Just look at your own dog this moment and those eyes – there is a special bond between dogs and their humans. So who could be surprised the spunky Judge Judy Sheindlin, a dog lover herself, wouldn’t take the opportunity for a dog to decide who his real owner was during a tense courtroom moment.

In a viral clip of “Judge Judy” posted Monday, two pet owners presented separate cases for custody of a once “shared” pooch. It would be up to the judge who would be granted custody of the adorable pint-sized pup; which each party going back and forth claiming ownership. When Judge Judy finally had enough, and if you’ve ever tuned into the popular courtroom drama, it’s pretty easy to see when she runs out of patience and wants to get the issue resolved.

Judge Judy ordered the dog be brought into the courtroom and let loose. With his tiny tail wagging, the little pup rushed to the man and jumped on his leg; the man began to cry.

Video: You can decide for yourself