Wes Anderson’s upcoming film “Isle of Dogs” movie trailer has been released. With a confirmed  date of March 23, 2018, the movie depicts Japan some 20 years from now where “canine saturation has reached epidemic proportions.”

The much anticipated movie centers around Mayor Kobayashi’s order to exile all dogs to “Trash Island” after an epidemic outbreak of the dog flu. And so what are a gang of a feisty group of dogs to do after having been abandoned by the very people they had always depended on for food, care and love? The dogs do their best to survive the horrible existence they must endure with no hope from anyone. 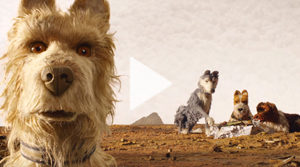 Then one day 12-year-old Atari Kobayashi crashes on the island in search of his lost dog ‘Spots,’ and the dogs join the youngster to help him find his dog. And thus begins an emotional story of bravery, corruption, friendship and the importance of a dog in a young boy’s life. Be prepared for the one-eyed puppy who captures our hearts and lots of “sniffing” jokes.

The film stars Bryan Cranston, Greta Gerwig and Bill Murray are the voices of the characters, but listen for Scarlett Johansson, Jeff Goldblum and even Yoko Ono.

Check out the official trailer: