You are here: Home1 / News2 / animal cruelty3 / Injured puppy recovering after being found in trash can 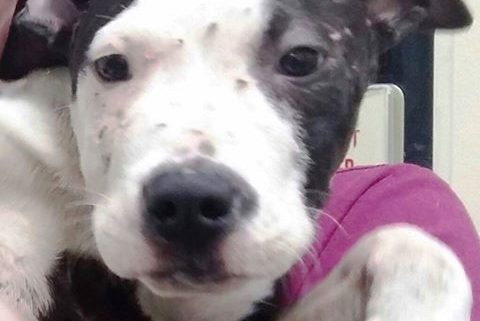 A darling puppy is recovering after he was discovered in a plastic bag, thrown away like garbage in a trash can in Englewood, Illinois. The puppy, dubbed “Mr. Riley,” is covered in bite wounds – it is surmised that he was used as a bait dog, to help train fighting dogs how to attack, maim and kill.

On January 23, the Animal Welfare League reached out to the public for help in finding out whoever is responsible for injuring the innocent puppy. The shelter stated:

Help Us Help Them!
Found by police in an area being investigated for dog fighting. This little 4 month old American Staffordshire terrier “bait baby” was in a plastic bag, inside the garbage can. Police say, the puppy was used as a teaching device to train dogs to fight.

According to the shelter, not only is the puppy’s body covered in bite wounds, but his “little manhood” was mangled and nearly bitten off. Mr. Riley underwent emergency surgery to help repair the damage – he is now recuperating from his injuries.

Beautiful ‘Angel’ on the list to be destroyed at busy animal control...