You are here: Home1 / News2 / Dogs3 / dog rescue4 / This Hurricane Harvey Pup Found A Home With Paramedic Helping In Texas

Hurricane Harvey wreaked havoc on much of Texas, but stories of heroism and compassion have been repeatedly shared in the midst of the flooding and clean-up. Animal shelters have received donations and heroes have been at the ready to save dogs abandoned in the chaos.

One of the hurricane survivors, an eight-month-old collie-mix puppy dubbed “Houston,” fell in love with a Las Vegas paramedic who traveled to Texas to help the hurricane victims. According to ABC News, Lester Hernandez first met Houston four days after arriving to the area…the pup was outside of the George R. Brown Convention Center.

Little Houston, presumably a stray from the area’s Greater Third Ward district, was picked up by transit police officer Dell Valderas. Valderas was approached by the Vegas paramedic, who told her that he wanted to give the puppy a home. 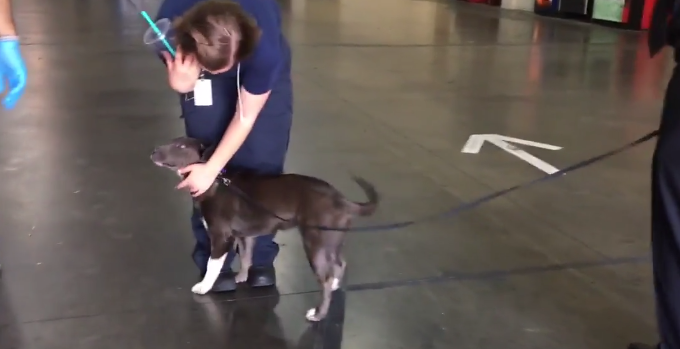 Hernandez had to get the green light for adopting Houston from his wife – happily, she said yes. Houston is now back in Las Vegas with the Hernandez family. Today she shares her life with a four-year-old little boy and a German shepherd named “Rogue,” reported the Las Vegas Review Journal.

Houston is safe, but the area she came from will be impacted by the devastating storm for years. Hernandez hopes that people will continue to support the residents in the area who lost so much.

(Screenshots via ABC News and The Las Vegas Review Journal)

Trophy hunter kills therapy dog, thinking that she was a wolf