You are here: Home1 / News2 / Hunting3 / Hunter fires fatal shot at woman, mistaking her for a deer

A hunter, firing in the dark at what he believed was a deer, fatally shot a woman on Wednesday. According to the New York Daily News, 43-year-old Rosemary Billquist’s life ended shortly after she took her two dogs out for a walk in Sherman, New York.

It was 34-year-old Thomas Jadlowski who fired the fatal shot from a pistol approximately 40 minutes after the sun had set…a time that is illegal to hunt. Dale Dunkelberger of the state Department of Environmental Conservation’s hunter education program, commented on the illegal action in the Buffalo News:

“In this case, it appears from what I gathered this was after sunset, and he shouldn’t have been out there hunting after sunset. You’re done. That’s the law.”

Jamie Billquist, Rosemary’s husband, noted that his wife, an avid runner, was an “angel” who was always quick to help others. No charges have been filed as of yet and the shooter is cooperating with the authorities.

Recently in the news: Crews work for hours to save dog trapped in a deep hole 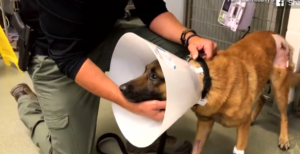