Early Thursday morning, Stormy the cow, escaped from a live nativity scene in Philadelphia’s Old City neighborhood. Not once, but twice did the seven-year-old Hereford cow, who lives at a farm in Philly, escape only to be corralled and returned to her pen by a host of volunteers, cops and assorted news media chasing the bovine for a morning giggle. 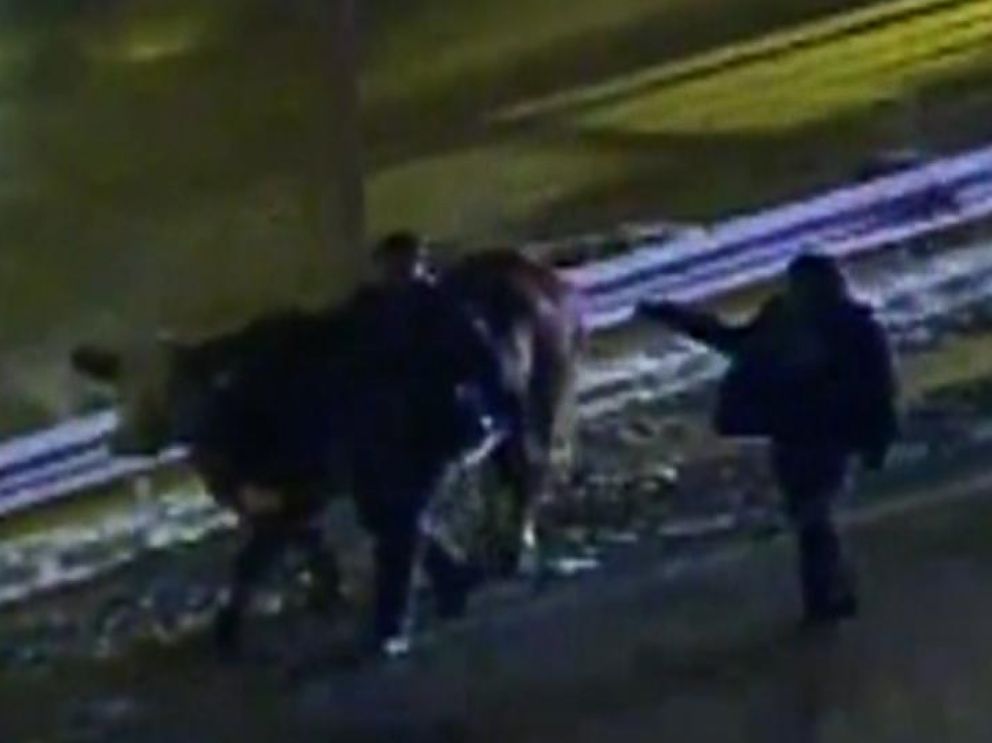 According to AbcNews, the first time the nativity cow escaped, she hoofed it to the highway and caused quite the traffic tie-up. How often does a driver have to stop for a quick moving cow? She left from the Old First Reformed Church of Christ around 3:00 a.m., however was brought to safety by the police within an hour. 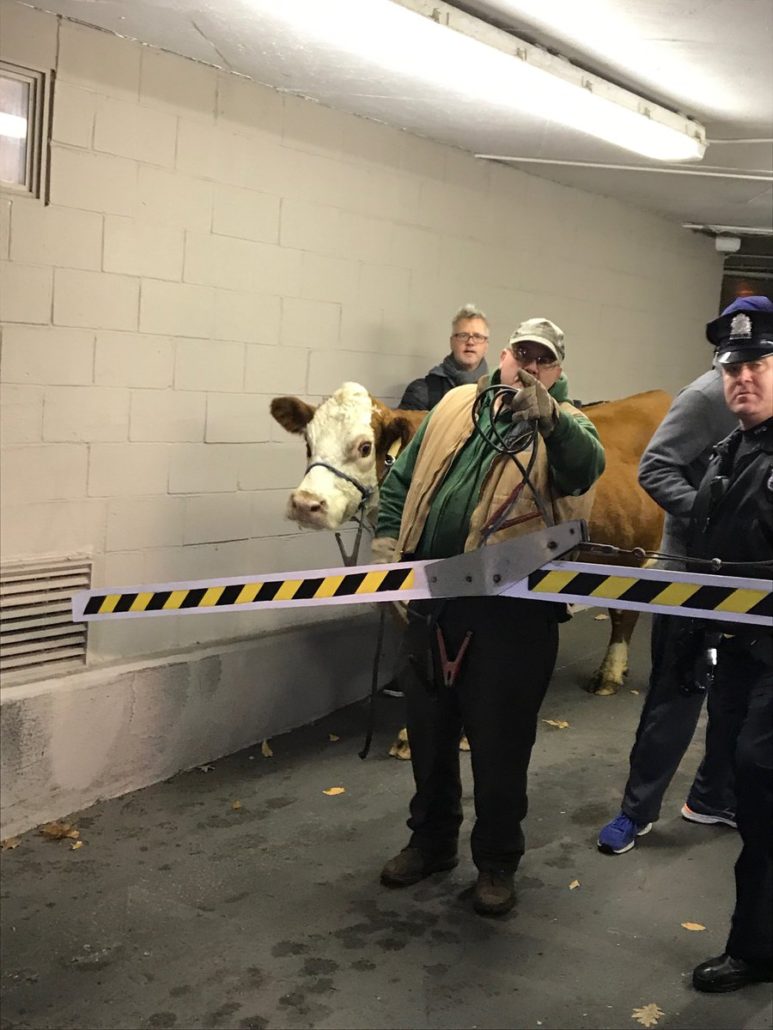 As if Stormy had a particular destination in mind or maybe she needed to finish her Christmas shopping, the next great escape occurred just hours later. This time, instead of traveling via the busy highway, she used the more local route and took to city streets until she reached a parking garage on the fourth floor. And no, she was not charged the regular $12 an hour for parking.

And in order to keep Stormy happy – her devoted attendants gave her breakfast, but not before Stormy made the morning Twitter rounds – and oh you have to laugh at these from the Philadelphia police: 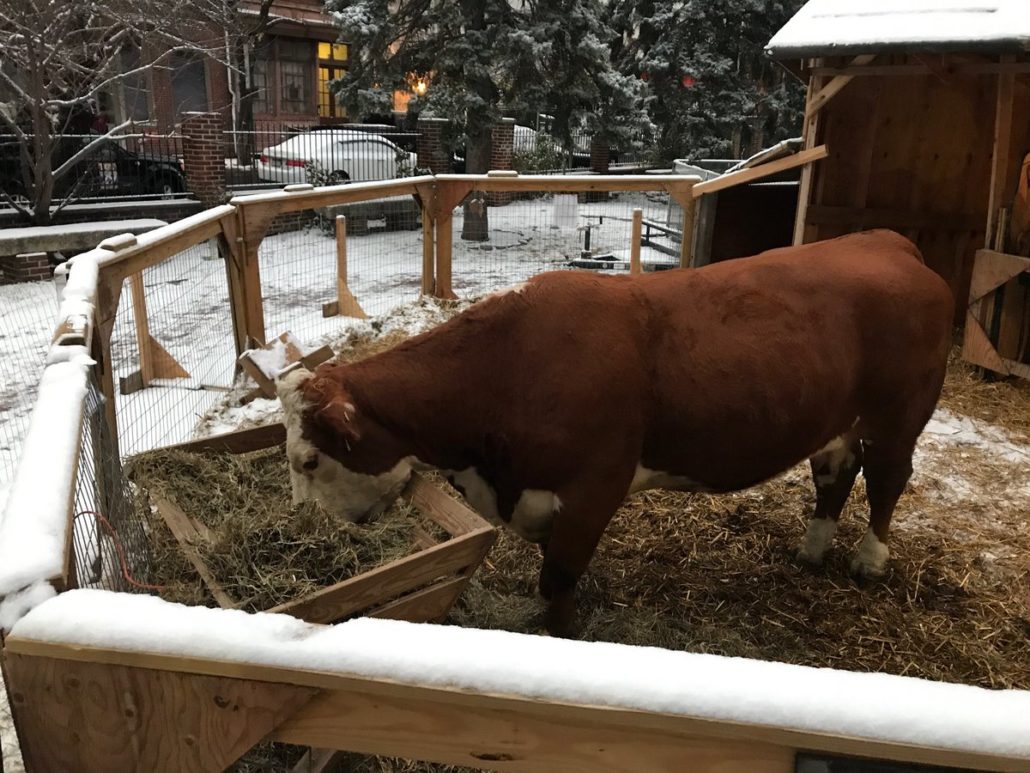 “If you’re in the area of 4th and Market, beware of traffic delays. A cow is loose. Again. No, we can’t believe we’re tweeting this either.”

And then came more:

“You know, you start your day, saying ‘well, being a cop is a tough job, but at least I won’t have to catch a cow today.’ “But then wouldn’t you know it? You’re wrangling a bovine. Then you say, ‘Well, at least I’ll never have to do it again.'” 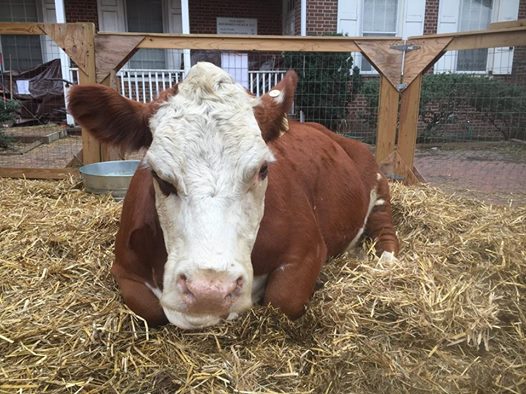 Even more of the tweets were hilarious. How about this one?

Emily Lippiello: “Mooooove over! A cow escapes a nativity scene….”

A pastor at the church thinks someone tampered with the latch allowing Stormy’s great escape. Sorry to say, Stormy lost her holiday job and was sent back to the farm and replaced by Ginger. She is fine however, and so much luckier than most cows who have the bad luck to live on dairy farms.

(Photos of Stormy the cow via Twitter, Philadelphia Police)