On Friday, a heroic K9 took a bullet which was meant for his handler. According to the Palm Beach County Sheriff’s Department, K9 Officer Casper was injured while protecting his handler during a shootout in Jupiter, Florida, between 46-year-old Philip O’Shea and deputies.

O’Shea, who has an extensive criminal history, was shot and killed after he hit K9 Casper. According to CBS News, the suspect had several outstanding warrants and was wanted for a robbery which had taken place at an area bar earlier in the day.

Shortly after the incident, the Palm Beach County Sheriff’s Department stated, “PBSO K9 Kasper took a bullet that was meant for his K9 Partner. He is currently recovering and in stable condition.”

K9 Casper returns home after taking a bullet that was meant for his K9 handler.

On Saturday – the department noted that Casper was well enough to go home from the veterinary hospital.

Veterinarian recommended that dog be put down – why this devoted owner is happy that she ignored that advice. Read the story here. 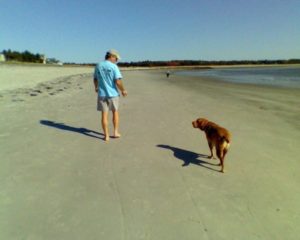 Update on ‘perfect’ dog on death row
Scroll to top