You are here: Home1 / News2 / Heartwarming3 / Heroes rescue tiny puppy who was stuck in a car engine 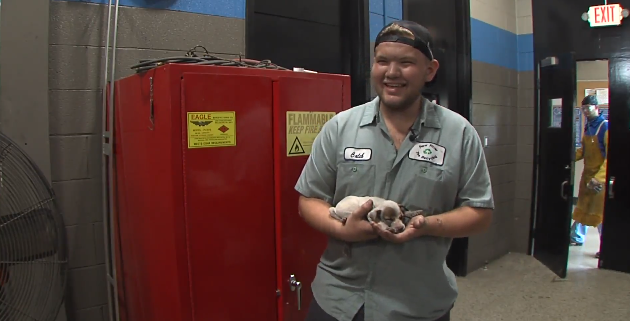 A tiny puppy is lucky to be alive, and lucky that some well-equipped heroes were able to free her from a rather frightening predicament. According to Fox 8 News, Robin Haas of Surry County, North Carolina, had stopped at a Walgreens when she heard an unmistakable sound which made her stop in her tracks.

From a nearby car, parked in the same lot, was the sound of a crying puppy. She told Fox 8, “There’s no mistaking that little puppy whine.” The pup, who was stuck in the engine compartment, was in luck – Haas is a welding instructor at Surry Community College. 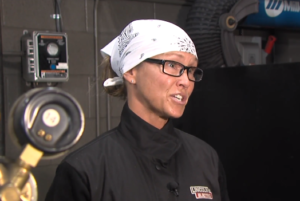 Haas reached out to her students for help and Caleb Costner answered the plea for assistance. Costner stated, “I didn’t believe it at first. I didn’t even see it in there, but Robin told me it was down there.” The pair worked side-by-side to move engine parts and extract the puppy from where she was holed up.

Amazingly, the puppy was not harmed – despite being in the engine compartment for what was determined to be a 45 minute trek. The car owner told Haas that she doesn’t have any pets and was at a loss for how the puppy got into her car.

The puppy was not only rescued, but she has a new home with one of Haas’ students. Student Michelle Kirkman told the news station, “Ms. Haas came in holding her this morning and she was all covered in grease and shaken and scared and I fell in love.”