It was a four car crash on Monday, Chicago police handled on Lake Shore Drive near Ohio Street Beach. One car swerved in front of a SUV setting off a chain reaction for two more vehicles striking each other. In one of the vehicles, a frightened dog jumped out and ran away – all towards Lake Front Trail and in his panicked state jumped into Lake Michigan. 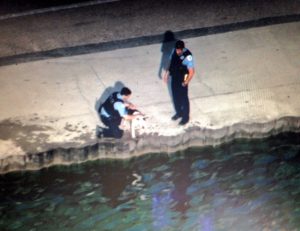 According to CbsNews, it was time for Chicago policemen to be canine heroes; one officer was able to pull the large black and white dog out of the lake. Moments later, the dog tried to run away again, but the persistent men in blue, and that’s why we love our compassionate officers so much, chased after the scared pooch until they could get him calmed down and safely leashed.

Two people involved in the crash were transported to the hospital complaining of back injuries. It would seem the rescued pooch avoided any injuries. He did however make a few new friends.

Many thanks to the good guys from Chicago’s finest. These are the men and women who risk their lives to keep people and their pets safe.

Check out his short video: (video captured by AbcNews helicopter)

Chicago police officer arrives just in the nick of time to rescue a dog that fell into Lake Michigan in Chicago. http://abcn.ws/1gBong2