You are here: Home1 / News2 / Dogs3 / Hank the dog is released to his family after months of being locked up 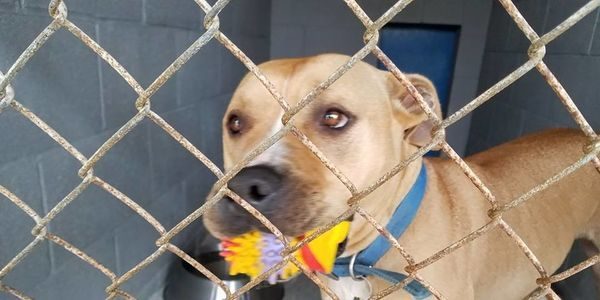 Hank, a pit bull deemed “a dangerous dog” after allegedly attacking goats and a pony in April 2016, has been freed from the Washington’s Lewis County Animal Shelter. After the deadly incident, which involved Hank (previously named “Tank”) and another dog (reported to be his mother), he was given the dangerous dog label and locked up at the shelter.

Months after being impounded, Tank’s name was changed to Hank the shelter directed made the decision to adopt him out to Jann Propp-Estimo; at the time of adoption, no mention was made of the dog’s previous history and the dangerous dog allegations.

For five months, Hank lived with his new owner – but in May, the Lewis County Prosecutors Office found out about Tank/Hank’s “illegal” adoption. They showed up at Propp-Estimo’s door to seize Hank and return him to Lewis County Animal Shelter while a judge decided his fate.

Legal fights have been ongoing since that time. This week, a judge decided that Hank could be returned to his family. On a Care2 petition established on Hank’s behalf, the good news was announced to Hank’s thousands of supporters:

We are so happy to announce that the efforts of Hank’s family, PAWS Across America Advocacy, and the over 400,000 people who signed this petition have paid off. We won! Instead of the death sentence being carried out on October 18th, Judge Skinder of the Thurston County Superior Court declared Hank a free dog.

According to the Seattle Times, Hank is free…for the time being. The county can apparently challenge the judge’s decision, or decide to walk away from the case entirely. In the meantime, Hank is home and soaking up the love and attention that he has been denied for the past five months.

Note: Long after Hank/Tank was implicated in the deadly attack, it came out that he was not likely the aggressor. It is believed that his mother, Sadie, was behind the attacks instead.

Prior article about Hank at this link.