You are here: Home1 / News2 / Dogs3 / Groomer cleared of wrong-doing in puppy’s death

After an investigation, and findings which did not provide enough evidence for charges, a North Carolina grooming business has been cleared of wrong-doing in the death of a family’s puppy. According to the Reflector, Greenville’s Yuppy Puppy grooming salon will not face criminal charges for the death of a five-month-old English Bulldog named “Bruno.”

A necropsy on Bruno’s body did not reveal any signs of trauma or strangulation – the report stated, “This puppy had features of brachycephalic airway syndrome which can compromise normal respiration.” This particular syndrome is common English Bulldogs and it can happen when the dogs are stressed or excited.

According to the report, Bruno began aspirating blood after a muzzle was placed on him at the salon – it stated, “He started aspirating blood, had diarrhea, went limp and was not responding. Blood was in the mouth. They took the dog to a nearby veterinary clinic.”

Though the pup was rushed for emergency veterinary care, he could not be saved. Find the original story about this situation here.

Recently in the news: Firefighters served sausage from piglets they saved in a fire 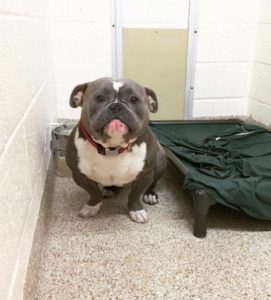