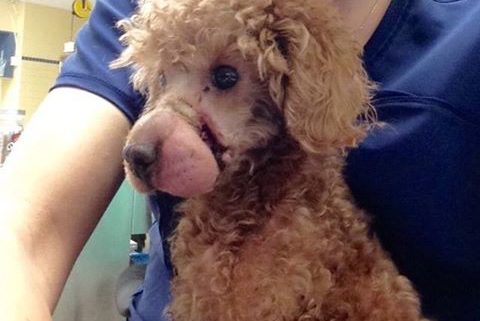 An injured young poodle, just one to two years of age, was found on Christmas Eve by a good Samaritan in Toronto, Ontario, Canada. Toronto Animal Services provided details about the suffering the small dog (dubbed “Frankie”) had endured before he was discovered:

He was outside, by himself, with an elastic band around his nose. Frankie was obviously distressed and very thin due to chronic malnutrition. The elastic had caused severe injury to Frankie’s nose and to the tissue inside his mouth.

The good Samaritan took the injured dog to a veterinary hospital for care and Toronto Animal Services subsequently took over responsibility for the pup. Amazingly, despite being neglected and abused, Frankie has maintained a good demeanor. Animal Services explained:

Despite the horrible abuse that Frankie has sustained, he presents as a happy, pleasant, trusting dog … heartbreakingly typical of dogs in his situation.

Frankie is recovering in a foster home – the authorities are still hoping to find out who is responsible for hurting this young dog. PETA is offering a $5,000 reward for information leading to the arrest and conviction of whoever is responsible for this heinous act of cruelty.

Donations for Frankie, and other dogs who are need of care, can be made at this link.