You are here: Home1 / News2 / animal cruelty3 / Golfer offers explanation why he decapitated goose with club 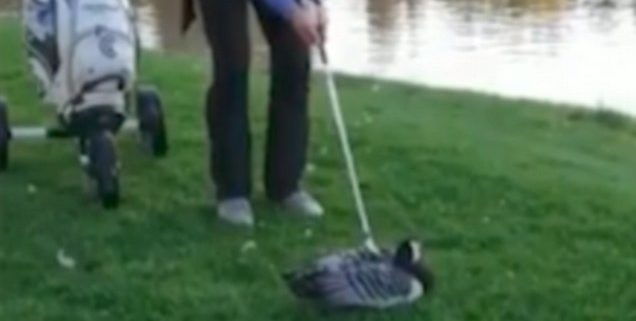 The golfer who allegedly killed a goose in Finland, after a video had been posted online which showed him lining his club up to the back of the neck of a defenseless goose and then swinging and decapitating the bird, has stepped up to give his version of the story. The video is stated to have been filmed at the upscale Vantaa Golf Park near the Finnish capital of Helsinki. 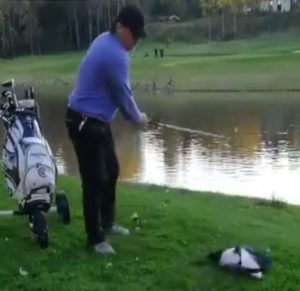 The video, which had been uploaded to LiveLeak, garnered immediate outrage, and managers of the golf course notified police. According to the Sun, the managing director of the golf club stated he filed a criminal complaint against the golfer who is stated not to have been a member of the club. The video was uploaded under the title “Finnish Golfer Kills Barnacle Goose.” The person taping the egregious cruelty is heard laughing in the background.

The unnamed golfer, who is currently being investigated for animal cruelty, revealed to llta-Sanomat, that he had killed the goose as an act of mercy after the bird was injured as a result of one his drives. He said the bird had been fatally injured and had been convulsing in pain from both its mouth and its beak. He then decided to hit the bird on the back of the head to ends its suffering, but had no idea the swing of his golf iron would decapitate the bird.

Representatives from the golf course have banned the golfer from ever using the course again and have not been able to verify the claims of the golfer since the club had been closed at the time. Still there were other options for caring for injured animals.

“If there is an injured animal I think the correct way to do something is to contact the police or animal authority and find out what you should do about it,” stated the golf club’s managing director, Ville Nurmi.

The RSPCA has also weighed in, stating what the golfer did was a horrible way to kill a goose and would have caused unthinkable suffering. After all, there are many humane organizations the golfer could have notified. And to think, golf is supposed to be a “gentleman’s sport?” Surely not in this case. 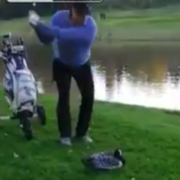