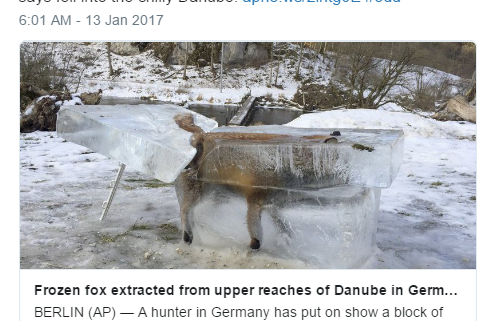 A fox, frozen solid in a block of ice extracted from the Danube River, has been put on display by a German hunter who hopes to warn others of the dangers of the icy river. According to ABC News, the hunter found the frozen fox earlier this month and he put the deceased animal on display in Fridingen.

As temperatures plunge across much of the nation and many parts of the world, many ponds, lakes and rivers have been covered with ice. Some water sources have a thick covering of ice, but many areas are only thinly covered and animals (and people) who venture into harm’s way run the risk of plunging into the frigid water when the ice gives way.

Officials warn people who observe an animal who has fallen through an ice-covered body of water to contact the authorities for assistance.