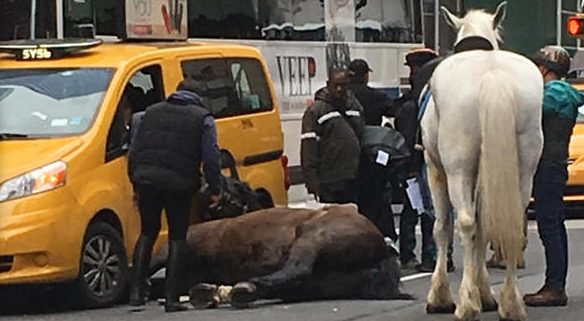 A frightened horse, making his way down a crowded street in Manhattan, New York collided with a taxi on Monday. According to the New York Daily News, Billy, a draft horse used by Central Park Sightseeing, was spooked by the honking of a horn and galloped into a taxi cab which was stopped.

Amazingly, it was the rider of the horse who apparently encouraged the driver of a nearby truck to honk the horn – the very horn which caused Billy to go into a panic. A witness told 1010 Wins “As I was approaching the taxi cab I could see the horse was underneath the taxi and a couple of people were pulling the horse from underneath the taxi.” According to CBS News, the horse’s rider was a stablehand.

Fortunately, the horse was able to be removed from beneath the taxi and did not seem to be obviously injured from the frightening ordeal.

Monday’s incident seems to reinforce the concerns that many people hold over the safety and well-being of horses who are forced to work on busy city streets. In April, a carriage horse stumbled and fell (or collapsed according to some) in Charleston, South Carolina. The horse, “Big John,” suffered abrasions in the fall. 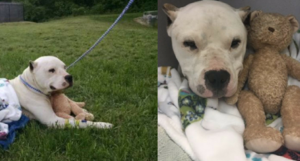 Pup was adopted at 3 months of age, returned to shelter when family moved
Scroll to top