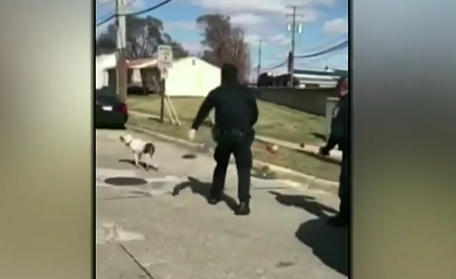 A disturbing video, showing a frightened dog being repeatedly tasered by police officers, has been virally viewed by users of Facebook. According to Click on Detroit News, the dog, who was recently adopted, escaped from his owner’s home in Roseville, Michigan.

The dog’s owner reached out to the police for help after she failed to catch her runaway dog. The woman explained what happened in a 911 call:

“He snuck out through the back door.He just will not come home. And I don’t want him biting anybody. He doesn’t bite, but he’s pretty intimidating. He likes to run up on people and bark.”

Controversy has erupted after video footage of the dog’s capture was posted to Facebook. The dog appears to be trying to run away from the officers, who have used a catchpole to restrain him. Despite the dog trying to get away, and being restrained, the dog is hit repeatedly with a stun gun.

Fortunately, despite the disturbing video, the dog is reported to be okay following the ordeal, reported WYCD News.

When a picture speaks volumes: Dog shown thrown away like trash