A Florida man, who has been arrested for animal cruelty, has blamed separation anxiety for his dog’s skeletal condition. According to Monday’s publication of My Statesman, police in West Palm Beach discovered the emaciated dog at the home of 28-year-old Christopher Adam Perez while they were investigating the death of the man’s nine-month-old baby.

When the authorities were at Perez’s home on the 1100 block of Handy Oak Circle,  an emaciated boxer named “Athena,” was discovered locked in a urine and feces filled crate. The dog’s white paws were stained from the waste which she was forced to live in.

As reported by the Palm Beach Post, Perez advised officers that Athena refused to eat, because of separation anxiety, when he would leave for work. Perez’s claim failed to hold water after he relinquished custody and Athena ate “voraciously” and gained 15 pounds in a short period of time outside of her former owner’s “care.”

Records indicate that someone had complained to animal control months earlier about Perez and his wife keeping a dog “all day” in a small crate. Perez was arrested last week on animal cruelty charges, but he has already been released after posting bond.

A will to live – meet Nubby, a puppy with multiple health issues who is overcoming great odds. 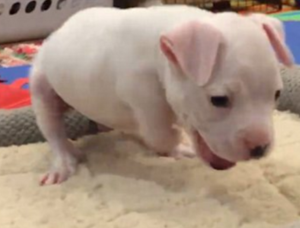