You are here: Home1 / News2 / Dogs3 / Fishermen find body of dog in plastic container in lake

Fishermen enjoying time on Wisconsin’s Okauchee Lake over the holiday weekend made a disturbing discovery. According to Fox 6 News, a plastic container was in the water by some rocks near the lake’s boat launch – fisherman Mike Miller saw the container in the shallow water and went to investigate.

The contents caused Miller to jump back in horror and surprise – inside of the container was a badly decomposed dog whose front legs appeared to be missing. Miller told Fox 6, “It was pretty disturbing, pretty graphic, so I chose to take some pictures and notified police.”

After investigating, the Waukesha County Sheriff’s Department located the dog’s owner who informed them that he had tried to inter the dog in the lake several years ago. Miller and the local authorities hope that others will not follow suit because finding the body of a deceased pet is disturbing, to say the least.

Family’s husky makes an unbelievable mess while they are away – read the story here. 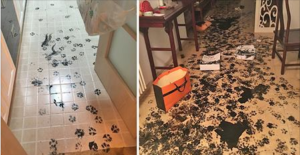