You are here: Home1 / News2 / animal cruelty3 / Firemen who saved piglets from fire rewarded with sausages made from same...

In Wiltshire, England, firefighters saved a litter of baby piglets from a raging barn fire in February. Now tell me if this bothers you? Those same firemen were rewarded this week by the farmer with a dinner of sausages made from those same pigs. 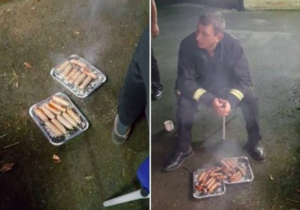 It had been a rescue of 18 pigs and their two sows saved in the nick of time as the brave firemen from Pewsly Fire Station ran into the burning barn. According to the Guardian, the piglets were just two weeks old when they were rescued. The farm owner promised them she would serve up the animals in a barbecue. Just six months later, the pigs became dinner with the farmer, Rachel Rivers who donated the pigs for a celebration dinner to honor the firemen after informing the local media:

“I’m sure vegetarians will hate this!”

“Exactly 6 months and 1 day since FFF’s Olsen and Richardson rescued 18 piglets from a farm in Milton we got to sample the fruits of our labour from that February night.”

And Rivers wasn’t wrong, because it didn’t take the news long to go viral. The Pewsey Fire Station, however realizing how disturbing the photos of the celebration were and the firefighters describing the sausages as “fantastic” and “highly recommended,” soon removed the post and the photos from their Facebook page with an apology:

“In regard to a recent post on this page. We recognize that this has caused offense to some – we apologize for this and as such have removed the post.”

Rivers defended her actions stating raising pigs and killing them for sausages was the way she and her family made their living. Most online responses showed disdain for the celebration – perhaps more disgust because the event was made so public.

“What a dreadful story,” one poster wrote. “Lovely that they saved the pigs, but why publish their demise? Grim.”

And finally there’s the response many of us preferred:

“What’s wrong with thanking someone by sending them flowers?” (or chocolates?)

Rest in peace little pigs. The images of the firemen saving you little ones and then eating you all just six months later certainly detracts from the aura of the heroism we love to associate with our brave and compassionate firemen.

You have to see what this man created under the stairs for his dog – amazing!!