An Oceanside, California, family’s two dogs have been brutally tortured for months by an unknown abuser and the local police are investigating. According to Thursday’s ABC News 10, the most recent attack on the family’s two Siberian huskies left the dogs with horrific injuries, including a gouged out eye and acid burns on their bodies.

The dogs, Estrella and Cocayo, have been subjected to torture by the unknown assailant since December, when they were poisoned with THC – in February, both dogs were burned with acid while inside of their yard and the recent attack, which involved somebody breaking into the family’s home, nearly claimed their lives.

The brutality of the recent attack prompted the dogs’ owners to move out of their home – they worry that perhaps one of their neighbors could be behind the horrific torture.

Anyone with information about these acts of cruelty should call the Oceanside police and ask for Lt. Saadat at  (760) 435-4580.

Find the GoFundMe account for the injured dogs here.

Pregnant dog has to be out of Texas animal control by Friday – read her story here. 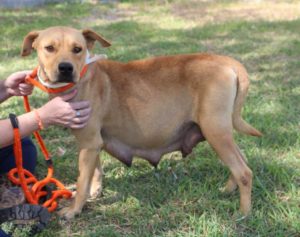 ‘A dime a dozen’ pregnant dog will die Saturday without help