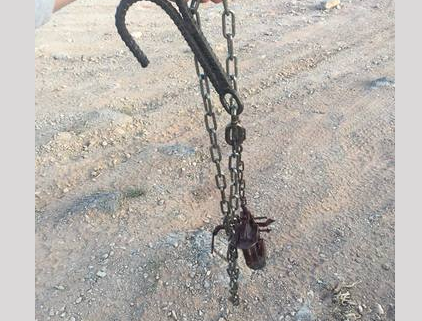 A Las Vegas family’s dog was injured on Sunday while hiking at Little Red Rock. According to witness Brandon Kennedy, the dog began screaming in pain after stepping into a metal trap which was placed near the popular hiking trail.

KTNV News reported that the dog’s owners were able to free their companion, but not before the metal trap caused injuries. Kennedy and a friend had rushed to the dog after hearing his screams, and when they arrived, they found him covered in blood.

Kennedy told the news agency the the dog was, “Dripping blood out of its mouth cause as he was caught in the trap, he started biting the trap of course to try and get it off him and of course it being heavy metal, he apparently broke a bunch of his teeth.”

The dog’s owners rushed their pet to a veterinary clinic for a treatment; the extent of his injuries are not known. Kennedy wants other dog owners and hikers to be aware of the potential danger – the trap appeared to have been placed illegally and he fears that there could be more.

Today in the news: Incredible tragedy – over 100 reindeer killed by freight trains
Recently in the news: Injured and blind boxer, shot in the eye, found wandering in the woods