An animal cruelty investigation is underway following the disturbing discovery of an emaciated puppy who was left for dead inside of a plastic bin. According to CBS Baltimore, the 10-week-old puppy was found in Columbia, Maryland, on March 25.

The Howard County Animal Control was alerted to the cruel situation by a good Samaritan who found the blue container in a grassy area of a neighborhood on Braeburn Road, reported WJLA News. The brindle pit bull mix puppy showed obvious signs of severe neglect, including being malnourished, missing fur and having open sores on his body.

The puppy was rushed to an emergency veterinary hospital for care – the pup, dubbed “Eddy,” is responding well to treatment. According to a press release from animal control, the shelter has already received requests to adopt the dog once he completes his lengthy recovery process.

Investigators are very interested in obtaining any possible information about the dog’s owner and/or the person who discarded him. Anyone with information is urged to call Animal Control at 410-313-2780 or email animalcontrol@howardcountymd.gov.

Dog fighting for life after being dropped off with elastic band around muzzle – read the story here. 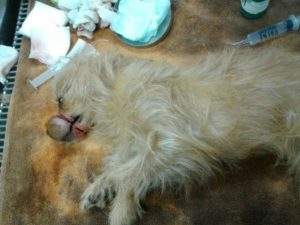