An uber-aggressive, or perhaps dumb, stranger tried to attack a woman who was walking her 110-lb Rottweiler, “Hercules,” along the Sawmill trail in the Grogan’s Mill community of Woodlands, Texas, over the weekend. According to KHOU News, the man’s attack was thwarted when Hercules turned on him and began biting.

Hercules is still a puppy at just 10-months of age, and his owner, Catalina Humphrey, has never seen him display aggressive behavior, but the young dog intuitively knew that the stranger was up to no good on Saturday afternoon, and he did his part to ensure that his owner wouldn’t be harmed. Humphrey told KHOU, “To know he protected me, I am beyond grateful he did that. He is a hero, because he saved my life.” 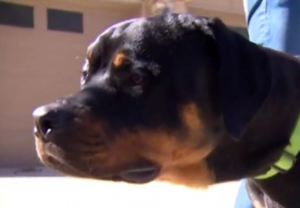 The Montgomery County Sheriff’s Office has been informed of the attack and they were able to get DNA from the dog’s mouth, and the scratch that the man left on Humphrey’s shoulder. The man who grabbed Humphrey is described as a clean-shaven black male in his 20’s. He is believed to be about 5-foot-10 and weighs approximately 175 pounds…and he is likely recovering from multiple dog bite injuries.