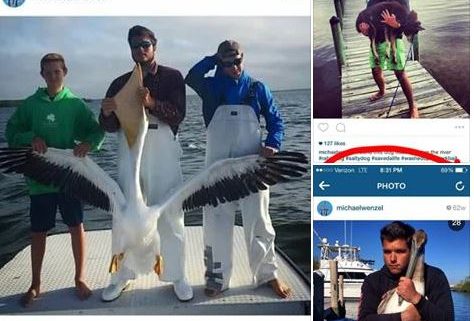 No creature seems to be safe from the hateful behavior of some cruel individuals. A video which is being shared on social media shows the depraved actions of a group of men who are currently being investigated by the Florida Fish and Wildlife Conservation Commission.

A shark, who was reported to be alive at the time of the video, is being dragged at high speeds behind a boat. The men in the boat are laughing as the shark is whipped around behind the boat – one person says, “Look it’s almost dead.”

Adding to the twisted situation are photos on Facebook which indicate that a dog was used as shark bait. A Facebook user by the name of “Liz” posted images and berated the alleged abuser:

The dude in #Florida bragging and having his mates film him whilst speeding furiously in his boat with a live #Shark attached on the back! Being tortured and smashed around! Geez mate takes some big brassy peanuts to do that! Let’s take a walk down memory lane and see what other heinous crimes against nature you have so gallantly committed! #FWC Michael you are so proud of your efforts, hope you don’t mind that we share! SHARE

According to WFLA News, social media users alerted the authorities about the damning video. An official statement about the situation has been released:

“The FWC has been alerted to a video circulating on multiple social media sites showing a group of individuals traveling at high speed on the water dragging a shark behind the vessel.

The FWC takes this very seriously and is currently investigating this incident. We are also attempting to identify the individuals in the video and where it took place.

Anyone with information is urged to contact the FWC’s Wildlife Alert Hotline at 888-404-3922 or Tip@MyFWC.com. Individuals can remain anonymous.”

Dog died after man dragged her on the asphalt