You are here: Home1 / News2 / Dogs3 / Dog and three puppies killed by angry swarm of bees

A dog and her three puppies are dead today – killed by an angry swarm of bees which went on the attack after their hive, inside of a hollowed out tree, was disturbed. According to Thursday’s CBS Los Angeles, the devastating incident happened not far from Sinthia Sullivan’s trailer in Norco, California.

A four-year-old hairless terrier, named “Evolve,” was stung over 300 times on Thursday – though Evolve was provided with veterinary treatment, she was not able to survive the dozens of stings. Three of her puppies suffered the same painful fate; a 70-year-old man who was stung multiple times, as well as Sullivan, also had to be taken to a hospital for treatment.

Fire fighters arrived to the scene and sprayed the tree with foam – officials advise residents who encounter a swarm of bees to keep their face covered and run for shelter. Call 9-1-1 for help in removing the a bee hive.

Adorable puppy has the image of a dog on her ear – click here to read more. 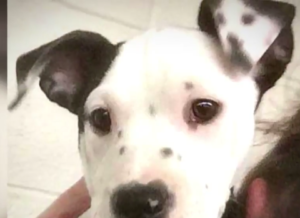 Do not play with puppies and drive – distracted driver hits deputy