A dog, currently in the care of Maryland based Homeward Bound Schnauzer Rescue, somehow managed to survive horrific neglect. She has been dubbed “Gretchen,” and the photos of the condition she was in prior to being rescued are appalling. 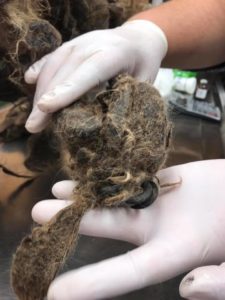 On September 9, her rescuers posted several images and video showing just how pitiful Gretchen’s condition was upon arrival. Her fur was unbelievably filthy and matted, nails overgrown, and skin scalded from the urine. The rescue group wrote:

Gretchen was in such bad shape she needed a shot of morphine immediately. She has a large mass on her side, which appears to be a cancerous tumor that has burst. Aside from looking horrific, the smell is awful. She is anemic and has significant mats hanging from all over her body. Her paws are very similar to Sammie, they are huge and looks like she has thick casts on each leg. The vet removed the mats that she could without sedating her. They contained feces, black oozing material that looked like tar, fleas, etc.

The neglected dog’s appearance after being washed and trimmed is amazing – in fact, she doesn’t look like the same dog. On Sept. 13, amazing before and after images were posted for people who are following Gretchen’s progress.