You are here: Home1 / News2 / animal cruelty3 / Dog had to be put down after being deformed from repeated breedings 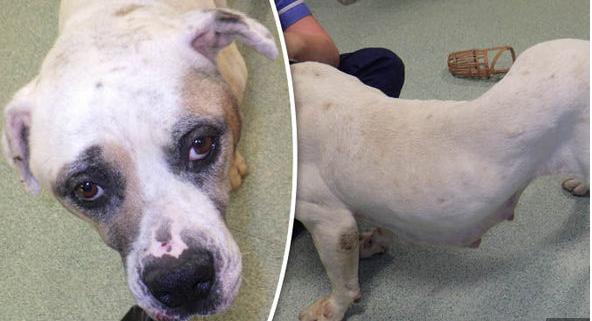 A dog was left in such horrible condition after being repeatedly bred that her body was deformed and she had to be put down. According to Thursday’s Express, officials with the RSPCA believe that repeated breedings left the American bulldog exhausted and deformed.

The neglected dog was apparently cast aside after her depleted body could no longer produce puppies for income – she was found weak and limping along a road earlier this month.

RSPCA Inspector Kim Charles described the dog’s pitiful condition when she was found to Express:

“Her mammary glands were very large and her body had become deformed as a result of all the breeding she has been put through.

“On top of that, she also had a horrific skin condition which had left her skin red raw.”

“It is so sad as she was so lovely and friendly, but it was clear that she was in a lot of pain and discomfort. She was very subdued and reluctant to move.”

The animal welfare agency has warned consumers to carefully research where their purchased puppies are coming from. Too many unscrupulous breeders have no regard for the dogs in their care and see them only as a mean to a financial end.

Thursday in the news: One of the best Houston-area dog rescues, woman refused to leave them behind!