You are here: Home1 / News2 / animal cruelty3 / Dog meat banned at festival after campaigning by activists

On Tuesday, breaking news about the Yulin dog meat festival in China was released by Humane Society International. According to the animal-welfare organization, dog meat will be banned at the event starting on June 15.

Just weeks ahead of China’s annual dog meat festival in Yulin, at which thousands of dogs and cats are brutally bludgeoned to death and sold for their meat, animal campaigners Duo Duo Project and Humane Society International have received reports from Chinese activist and confirmed by three traders at Yulin’s biggest dog meat market Dongkou, that the Yulin government is set to prohibit restaurants, street vendors and market traders from selling dog meat at the event. 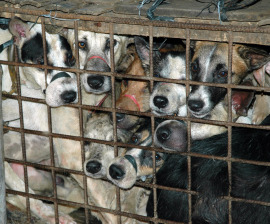 While campaigners recognise that the ban is temporary and does not yet signal an end to the Yulin event in advance of which dogs are still likely to be killed, it is nonetheless a milestone victory in the ongoing campaign to end mass dog and cat slaughter at Yulin, and is evidence of growing political will from inside China to clamp down on the trade.

Pup was adopted at 3 months of age, returned to shelter when family moved