You are here: Home1 / News2 / animal cruelty3 / Dog infested with maggots after being left in pen with feces for month...

A small dog is lucky to be alive after he was left to suffer outside, in a tiny pen, surrounded by feces for months. The dog, dubbed “Remo,” was rescued from his miserable existence this week and though veterinarians recommended that he be put down (due to his pitiful condition caused by extreme neglect), he is slowly showing signs of improvement. Remo can thank the rescuers at Unleashed Pet Rescue & Adoption for his second chance.

The rescue agency alerted Facebook followers to the condition of their new charge on Tuesday – the agency wrote:

He’s was so matted, he could barely move. His eyes were even matted shut.
Upon taking him to the exam room to be shaved, he collapsed. That’s when we noticed his skin was literally crawling from inside. Remo, barely able to lift his head, was wrapped up in blankets as we rushed him to Blue Pearl Emergency Vet. Upon arriving, they shaved him and found several holes in his tiny, fragile, lifeless body, where maggots are eating him alive.

The rescue group posted a positive update about the tiny survivor not long after his arrival:

After his EN tube was inserted through his nose to feed him, his blood sugar went up to 138 from 48!!!! This is great news!!! Reno’s blood pressure has also been raising from in the 40s to 80 with the help of norepinephrine.  He’s on 2 very strong antibiotics and pain medication through his IV.
Right now, he’s living up to his name!! We need to keep cheering this boy on!!

Remo showed enough improvement that his odds of surviving have increased to 50/50 – a vast improvement from when was initially taken in and expected to die. 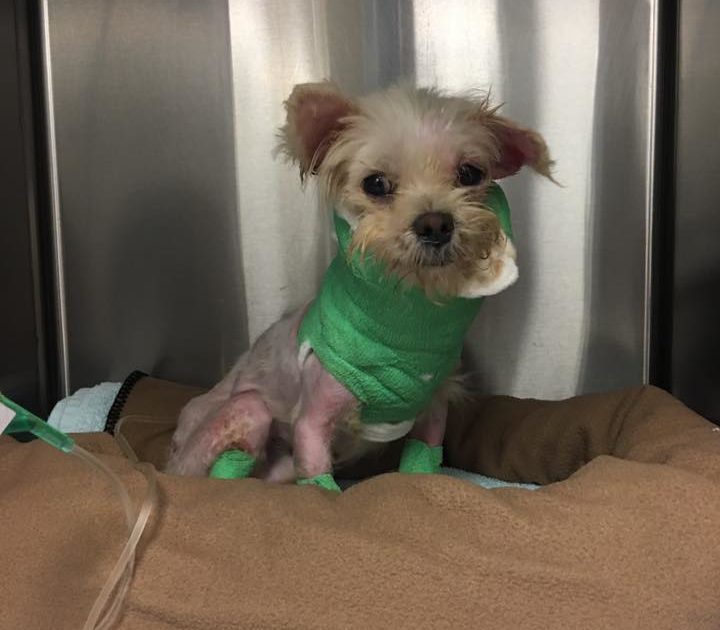 Remo has kind, compassionate people rooting for him and with continued veterinary care, and lots of prayers, he may pull through. The local animal control is investigating the situation to see if his former owner will face charges.

REMO UPDATE!!!! He's a fighter!! He hasn't given up, so neither can we!!! Please help us raise the funds to keep him at Blue Pearl, where he will have he best chance at surviving. http://www.unleashedrescue.com/monetary-donation/Orhttps://www.paypal.me/UnleashedPetRescue#remothestrongone

Posted by Unleashed Pet Rescue and Adoption on Wednesday, August 9, 2017

Donations to Remo’s care can be made at this link to the rescue group’s website.

Ventura man ordered to pay $20,000 in restitution for abusing friend’s...
Scroll to top