You are here: Home1 / News2 / Dogs3 / Hero dogs4 / Dog gives life to save guests at wedding from suicide bomber

An intuitive dog, who somehow realized that a teenage girl in Maiduguri, Nigeria, intended to inflict harm, is being hailed a hero. According to the Associated Press, the dog intercepted and “grappled with” a female suicide bomber who was at a wedding ceremony on Sunday.

While the dog tangled with the teen, the suicide vest detonated, killing the bomber and tragically, the heroic dog who tried to bring her down. Thanks to the dog’s intervention, the villagers in attendance at the wedding ceremony were spared injury and death.

Victor Isuku, a Nigeria Police Force spokesperson in Borno State, commented on the incident, which is believed to be the work of Boko Haram Islamic extremists:

A female suicide bomber with [an improvised explosive device] strapped to her body attempted to infiltrate a wedding ceremony gathering in Belbelo community of Jere. She was however prevented by a watch dog, so she had to detonate the IED to kill herself and the dog. The dog was owned by a resident in the locality.”

Two dogs shot and killed after man allows them to walk in public off-leash. Read the story here. 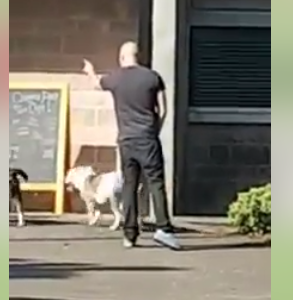