You are here: Home1 / News2 / animal cruelty3 / Dog fatally injured after being shot during field trials 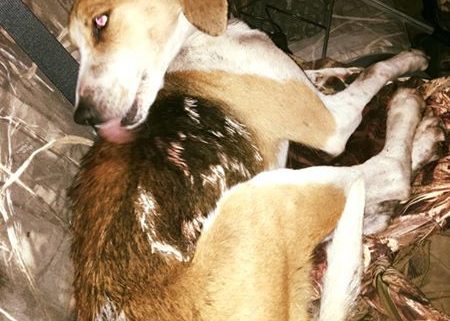 On Saturday, a hunting dog was shot while participating in the Trenton Field trial in Onslow County, North Carolina. According to the Jones County Sheriff’s Office, the female hound disappeared during the event and when she was found, it was determined that she had been shot in the backbone and the injury proved to be serious enough that she had to be euthanized.

The Eastern Carolina Houndsmen Alliance (ECHA), and other agencies, are banding together to offer up reward funds to find whoever is responsible for the heinous act of cruelty. The Jones County Sheriff’s Office updated Facebook followers about the growing reward fund:

***CASE UPDATE***
Several parties have offered rewards for information leading to the arrest and conviction of the individual responsible for this incident. Thank you!

Anyone with information about this situation is asked to call the Jones County Sheriff’s Office at 252-448-0035.

Critically injured dog hides in fear under vehicle that stopped to let her ...
Scroll to top