A woman’s dog died while at a grooming session at a Petco in Middletown, Rhode Island. According to Monday’s WPRI News, the five-year-old pug, named “Ollie,” had no (known) pre-existing health conditions which would have led to his untimely demise.

Ollie’s owner had left her pet with the groomers while she went shopping – when she returned, her dog was “on the floor” and people were tending to him. The sad incident is now being investigated by the Rhode Island SPCA and Middletown’s Animal Control officer.

Petco has released a statement which indicates that the company is also looking into what happened. Stephanie Wilson, the company spokeswoman, stated:

“All of us at Petco are deeply saddened by Ollie’s passing and we are currently conducting a thorough investigation,” We understand there is no way to make up for the loss of a pet, however, we are committed to doing everything possible to help Ollie’s family through this extremely difficult time.”

Investigators looking into who is responsible for leaving a starved puppy in a plastic bin – read the story here. 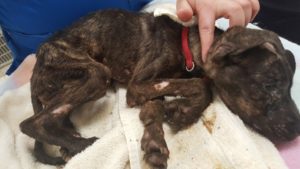