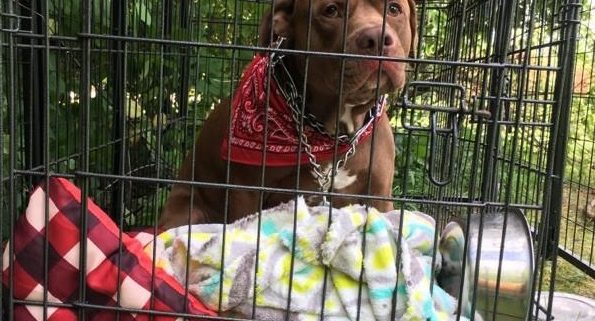 On Monday, someone abandoned a crated dog behind a veterinary clinic in Harwinton, Connecticut. Whoever left the pit bull also left behind a heartbreaking, handwritten note explaining why.

According to the note, the dog, name “Fatty McFat” belonged to someone who lost their home. The person wrote, “My human went homeless and found out they have a disease and cannot care for me.” The note also indicated that the dog is aggressive because he is scared. 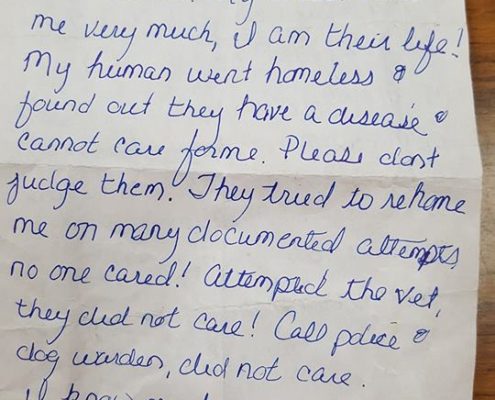 Fatty’s owner claims that multiple attempts were made to find the dog a home, but noted that “no one cared.” The most heartbreaking portion of the handwritten letter are the words, “My owner loves me very much, I am their life.”

The Harwinton Animal Control is hoping that someone knows who Fatty McFat belongs to. On Monday, the agency wrote:

ATTENTION!!
This dog was left abandoned in this crate behind the vets office in Harwinton. Male Pitbull, intact, no chip. Wearing red bandana and prong training collar. Someone has to recognize this dog, please look at the letter that was attached to the crate. Maybe you recognize the handwriting or the situation being described. Please call Harwinton Animal Control at 860-806-8743. Please share!

After 20 years, re-homed pony is back with his owner – watch the beautiful video here

Rescuers left after determining that this terrified dog was ‘too aggr...

‘A very good girl’ returned to shelter after free adoption even...
Scroll to top