A devastating tragedy took on Sunday night at a big cat sanctuary in South Africa. Animal Defenders International (ADI)  broke the news on Friday – two elderly Lions, who had been rescued and were living at the Emoya Big Cat Sanctuary, were killed by poachers.

The lions, José and Liso, were said to be best friends…big cats who had formerly been in the circus.  ADI wrote:

Ex-circus lions and best friends,  were relocated from South America last year along with thirty others – the conclusion of ten years of work for ADI, following the sad lives of these animals, campaigning for them and finally their rescue, which brought them home to their native environment, where they blossomed, growing in health and strength.

This cowardly killing of two innocent souls, sweet, elderly lions, one of whom had suffered brain damage from blows to the head in the circus, must not be left unpunished. The crime is currently being investigated by South Africa’s police and anti-poaching units.

Emoya also issued a release about the devastating loss their sanctuary has suffered with the senseless and cruel killing:

Thank you for your concern, your kind words, and support. It’s time to #standtogether.

We were “just” a sanctuary. This week, this changed.

Two of our lions were lost to poaching.

We are all heartbroken, but these killers will never break our spirit and the spirit of freedom that ADI has fought so hard for.

Because we are also angry. We are not going to take this lying down. We are standing together. Every sanctuary, every conservationist, every friend of ADI and Emoya. Every one of us.

We stand together against wildlife trade.

This is not just another poaching incident. We are going to unite, stronger than ever, and bring to justice the perpetrators who murdered our two beloved boys, José and Liso.

A plea to save family of former ‘street dogs’ in Texas – read more here. 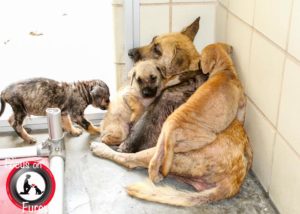