You are here: Home1 / News2 / News3 / The devastating storm the U.S. media isn’t talking about

Everyone has heard about Hurricane Harvey and the devastation it wreaked upon Texas…but few people are aware of the destructive storm which wiped out much of the Baja peninsula this week. Tropical Storm Lidia swept over the Los Cabos area (Cabo San Lucas/San Jose del Cabo) of Mexico days ago and the media, by and large, has not said a word. 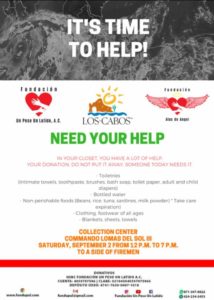 Much like Hurricane Harvey, Lidia stalled over the Los Cabos area, dumping huge amounts of rain on the area. The flooding which resulted wiped out bridges, roads, buildings and homes, and several lives were lost. Though the area is known as a popular tourist resort area, it is also home to thousands of people who live in the area who are struggling to clean up in the storm’s aftermath.

Two of the animal shelters in the area were able to keep the homeless pets in their care safe – but now, like in the areas impacted by Hurricane Harvey, facilities are full of animals who have been displaced from their home.

Mexico sent help to Texas after the state was crippled by the storm…will the U.S. return the favor?

Mother grieves for son electrocuted as he tried to rescue family cat in flo...