You are here: Home1 / News2 / Dogs3 / Devastated dog refused to leave side of deceased canine friend 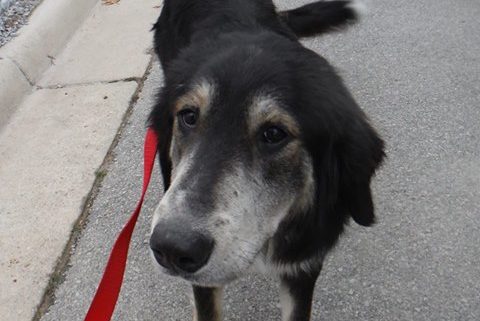 An animal control officer in Jonesboro, Arkansas, fears that a senior dog recently found in a ditch, beside the body of his deceased canine friend, may die of a broken heart. According to Saturday’s ABC 13 News, Officer Mike Owens was called out to the heartbreaking scene on Thursday after someone reported seeing two dogs in a ditch.

Owens found a Labrador retriever, who had appeared to have died after being struck by a car, and a senior shepherd mix who refused to leave his friend’s body. Officer Owens explained,

Physically, the surviving dog is okay, but he is mourning the loss of his friend, and Officer Owens worries that if an owner does not come forward quickly, the old dog might die from a broken heart. On January 5, a post to help find the senior dog’s owners was put on the Jonesboro Animal Control Facebook page:

This poor boy was found on Dan Ave by Animal Control after a good citizen let us know. He was found with his mate that had been ran over and had pass away. He did not want to leave her side at all we had to carry him to the truck and after loading his mate beside him he calm down a little. But if you know him please call us or his owners and let them know that he’s at Animal Control. He’s a male shepherd collie mix we think and is very old. So please help us help him get home.

The surviving dog appears to be in good physical condition – indicating that an owner is out there somewhere. Please share his photo and help reunite him with his family.