A cyanide bomb, set out by someone with the Department of Agriculture, has killed a Pocatello, Idaho, family’s dog. According to the Idaho State Journal, the deadly device is intended to be used as “predator control,” but it instead killed a three-year-old Labrador retriever, and put a 14-year-old boy at risk.

It was Theresa Mansfield’s child who encountered the deadly device on Thursday – the boy, and his dog, Casey, were not far from home when the device detonated. After the fatal incident, the Bannock County Sheriff’s Office released a statement which indicates that the situation is being investigated:

The Bannock County Sheriff’s Office is investigating an incident involving a predator control device that detonated killing a family’s dog. The Sheriff’s Office received the call earlier this date from the father indicating an unknown device had detonated in close proximity to his son and the family’s dog. The incident occurred on a ridge line located above a residence on Buckskin Rd.

The father indicated that the family dog had been killed and his son had been covered in an unknown substance as the device detonated. Luckily this child was not seriously injured. It was later determined that the device was placed at it’s location by the Department of Agriculture. The device is used by the Department of Agriculture for predator control and when activated releases a burst of Cyanide. The device is a M-44 device but is commonly referred to as a “Cyanide Bomb.”

This device is extremely dangerous to animals and humans. A picture of the device in included in this release for the public’s knowledge. If a device such as this is ever located please do not touch or go near the device and contact your local law enforcement agency. The family involved in this incident were evaluated at a local hospital and were released. 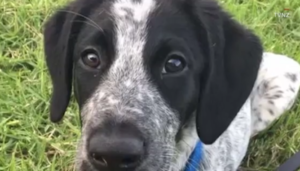 Disturbing images of dog hit by train after owners dumped her alone outside...
Scroll to top