A bizarre photo of a “demon goat” has gone viral on social media after a Facebook user posted  a video on August 17 with the following explanation:

“A strange creature has been discovered in India. The animal, whose shape resembles that of a human being, terrified a whole village.” 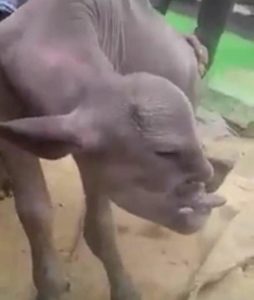 The story became a sensation after an article appeared in Asia One. The goat has attracted worldwide attention, with people claiming its face looks more human than the face of a goat. Its lips curl upwards. In the video, two people can be seen holding on to the animal as it continuously sticks its tongue out.

Sadly, the animal appears to have been a result of genetics gone awry. The photos and video have been shared more than 60 million times. This is not the first time goats with mutations make them look more human. This particular creature also appears to be missing his fur, and therefore the look of his smooth skin, makes him look even more human-like. Just three years ago, a stillborn baby goat was found in Argentina with features resembling those of a human infant.

Mysterious superstitious rumors abound with people believing these animals are really demon hybrids caused by unfounded claims that they were the result of sexual activity between goats and humans. Scientists claim that is an impossible theory with a species so different as a goat.

Sometimes truth is just stranger than fiction.  We can only hope this poor animal isn’t abused and treated with respect.

Check out the video. What do you think: