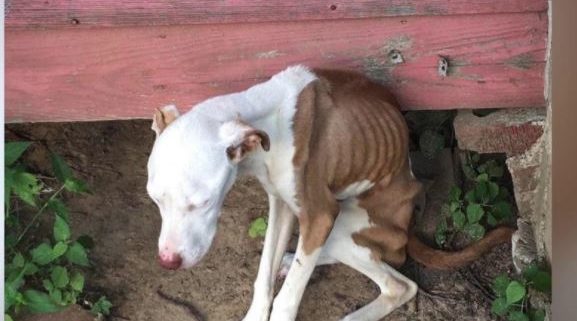 In a situation that can only be described as unbelievably cruel, a man left a dog to suffer without food for months in his backyard. According to WREG News, 27-year-old Kellen Jones of Memphis, Tennessee, claims that he didn’t have enough money to care for the dog.

Rather than surrender the dog to an animal shelter – or try to rehome him – Jones opted to move away and leave his dog with no food. For three months, the dog, “Nino,” somehow beat the odds and survived. Experts believe that Nino was forced to eat feces, and possibly dead animals, to stay alive.

Now, Nino is in the care of Memphis Animal Services – the agency has been working to keep the skeletal dog alive. His owner seemed to be ignorant to the fact that abandoning a dog without food is a crime – now he’s facing a felony animal cruelty charge.

“The owner told [the officer] he’d been away three months. He’d made no arrangements to have the dog cared for. The owner of Nino was very forthcoming with these details so perhaps he was unaware of his legal obligations.”

The shelter hopes to get Nino healthy enough to move to a foster home for continued care.