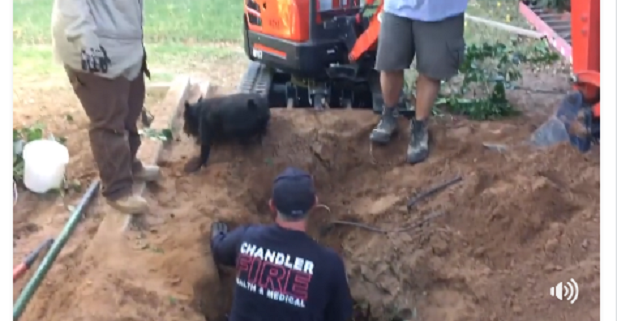 Rescue crews worked for hours to free an Arizona family’s dog from a deep hole. According to the Chandler Fire Department, the dog, a German Schnauzer named Rubin, was uninjured, despite being trapped for over four hours in a hole, five feet deep.

According to Fox 10 Phoenix, Rubin found himself in trouble after he chased a cat into the hole…the sizable hole had been dug by the family’s tortoise. Apparently, Rubin was so fixated on the cat he was chasing that he wouldn’t come out of the hole of his own accord.

Rescuers finally reached the strong-willed dog and then managed to coax him out of the hole, which was left open so the traumatized cat could eventually leave on his own.

The Chandler Fire Department commented on the various agencies involved in Rubin’s rescue:

It took the combined manpower of Chandler fire crews, City of Chandler utilities, APS, SWG, and the dog’s owner to free Rubin from 5 feet underground.

Team effort to rescue family dog. After four hours of digging the rescue was a success. It took the combined manpower of Chandler fire crews, City of Chandler utilities, APS, SWG, and the dog's owner to free Rubin from 5 feet underground. Rubin, a German schnauzer, was uninjured during rescue.

Recently in the news: Heinous – teen arrested for decapitating puppy and choking his girlfriend