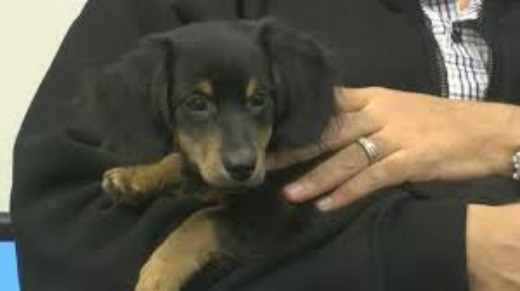 According to Tuesday’s CNY Central News, the couple believed to be responsible for throwing a puppy into a dumpster in Utica, New York, earlier this month has been identified. The people who allegedly double bagged the five-month-old puppy before throwing him into the trash are identified as 51-year-old Philip Damasi and 47-year-old Donna MacGregor.

Previous story about this cruel incident:

Had it not been for a man and his daughter, who heard the cries of the puppy from their apartment, the tiny Dachshund might not be alive today. The family immediately called 911 to report the puppy’s loud whines, but when no one arrived to help, the man and his daughter went outside to investigate for themselves. As reported by WktvNews, the two found the puppy wrapped in a quilt inside of two sealed trash bags shivering.

According to Christopher Thornton, who found the puppy now dubbed Oscar, the black and brown pooch’s tongue was already purple, and he was nearly lifeless when he first found him.

“When I opened the bag and saw him he was barely moving. He was yelping at a lower tone than what we heard earlier,” Christopher stated.

On the same day Oscar was rescued, Animal Cruelty Officer Bill Pulaski stated a call came in from a woman very early in the morning, who wanted someone to come to her home to pick up a puppy she stated she could no longer care for – just hours later Christopher Thornton found Oscar. A man and a woman have since been arrested and charged with misdemeanor animal cruelty for abandoning the puppy. During the interview, however the couple stated that the dog was already dead when they put him in the dumpster.

Oscar was named after Oscar the Grouch character from Sesame Street who lived out of a trash can. The puppy is currently in the custody of the SPCA in Central New York. Oscar is now very happy and healthy, and it might be that Christopher Thornton may want to adopt Oscar!

(Photo of Oscar the puppy found in Utica dumpster screenshot via TwcNews.)

Bull escapes slaugherhouse, then dies after being captured
Scroll to top