You are here: Home1 / News2 / animal cruelty3 / Cops shoot man’s pet pot-bellied pig and dump its body in the wo...

A resident of Slatington, Pennsylvania is heartbroken after police shot and killed his beloved 100-pound pet pot-bellied pig. Lance Sherer, 47, said his pig’s name was Oscar, and he didn’t find out about Oscar’s tragic fate until the next day. 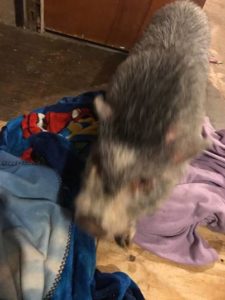 According to the Morning Call, on July 21, police were called about a disturbance where a pot-bellied pig had been acting aggressively and reportedly had bitten a woman. The pig did not break the skin of Kathleen Williams, after having wandered into her yard; he just left a red mark. When authorities arrived, the pig turned his attention to the officer and was said to have grunted and charged.

“The officer took his gun out and shot him one time. After that, the pig was in distress, so the officer shot him again out of compassion,” stated Police Chief David Rachman who defended his officer’s decision to shoot the animal. “I stand by what my officers did. We had to stop the threat. This was something that had to be dealt with at the time.”

Police then dumped the pig’s body in the woods along the Lehigh River.

When Lance Sherer found out about Oscar’s fate, he posted his grief and the tragic tale on his Facebook page stating:

“R.I.P. Oscar you will be truly missed by many. You were my best friend and loved by all. Your life was way too short shot down by police for showing the love and playfulness that you brought me and many others. I will never let you be forgotten.”

“I spent this evening searching for the remains of Oscar after he was shot was thrown like a piece of trash near Lehigh river in tall grass just out side the runways in slatington airport. Oscar is Home wrapped in his favorite blankets. It took all I had to dig his grave. Thanks for all your support. I will work to see this never happens to a pet in slatington again. As this is common practice in slatington as to how to handle pets.There  have been countless remains that discovered while fishing near this area. We all now know this is Slatington’s pet disposal.”

Owning a pig in Slatington is against the law, but advocates and neighbors question why Animal Control wasn’t summoned to the scene to assess the situation and corral the pig. Police Chief Rachman maintained Oscar had been aggressive and no one knew where the pig came from – and a 100-pound pig was potentially dangerous.

Perhaps Oscar wasn’t being aggressive, but merely playful? After all he didn’t break the skin of the person who said he had “bitten” her, and there’s little doubt if the pig wanted to hurt someone, he very well could have caused some damage.

Rest in peace Oscar – sure sounds like your life was snuffed out way too soon.

Crixus and Ashur: Forgotten souls who just need a break and a home
Scroll to top