You are here: Home1 / News2 / Dogs3 / ‘Confused and frightened’dog left tied to fence captured on... 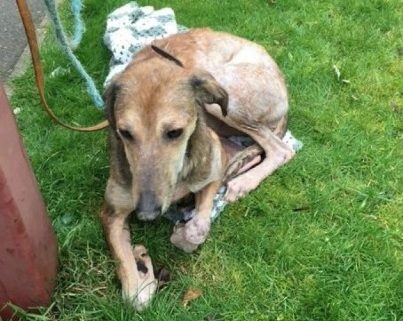 The RSPCA is asking for the community’s help finding the person who tied a frightened dog to a fence and then abandoned her. The dog was found by a Good Samaritan in Laburnum Grove, Cambridgeshire , United Kingdom. According to the Cambstimes, closed circuit television camera surveillance released on Thursday, showed a man in dark-colored clothing, wearing a hoodie, walk over to the fence and tie her up before running away as the poor dog just watches – obviously thinking her owner would be returning. 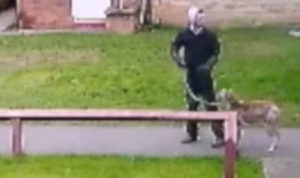 Inspector Justin Stubbs is investigating the situation and described the four-year-old dog he immediately transferred to the organization’s participating veterinarian clinic:

“She looked so confused and frightened when I arrived. She was curled up on the ground with big clumps of fur missing and the sore pink skin showing. There was extensive fur loss and it was near to freezing so she must have been very cold. The little dog was tied to a fence with a ragged old bit of blue rope. Luckily, she was dumped outside a house with CCTV so we’re now able to release the footage of her being abandoned in the hope of finding the person responsible for such cruelty.”

Dubbed Ella, the sweet dog is now being treated for her skin condition and will remain in the custody of the RSPCA. The dog wore no collar and is not microchipped. The community is asked to look at Ella closely, and if someone recognizes this dog or her owner, please call the RSPCA hot line at 0300.123.8018.

Help Ella to find justice so this person can’t abandon another dog.

(Photo and video of frightened dog via the RSPCA)

Video can be viewed by clicking here.