Was it an act of compassion, or cruelty? A man in Virginia Beach, Virginia, is facing animal cruelty charges after he decided to kill his elderly, ailing dog with a gun rather than rushing her to an emergency veterinarian, twenty minutes away from his home, in the middle of the night.

According to WTKR News, 65-year-old Michael Whalen ended his 15-year-old Vizsla’s life with a gun when her failing health, from old age and Cushing’s Disease, took a sudden, and painful, turn for the worse.Whalen told the Virginian-Pilot how he was caught off guard in the early morning hours in late January, “Never, ever did it occur to me that at 3:30 in the morning that she would start with these violent seizures and convulsions.” The agonizing seizures went on for 40 minutes – he described how he tried to comfort his dog, Allie, “I kept trying to calm her down. I had to spend most of my time keeping her from choking.”

Whalen knew that Allie was suffering and he feared that he couldn’t keep her from choking on the somewhat lengthy drive to an emergency veterinarian, so he got a small caliber gun, and ended her suffering himself. He told the Virginian Pilot, ” I needed to end this for Allie right away. It was too painful to watch her suffer.”

After ending Allie’s life, Whalen drove her to the beach because she loved the ocean…he dug a shallow grave and buried his long-time companion. Unfortunately for Whalen, burying a dead dog on the beach is not legal and when she was found by a passerby on February 10, not only did the unknown circumstances about how she died spark an investigation, but the discovery generated charges. 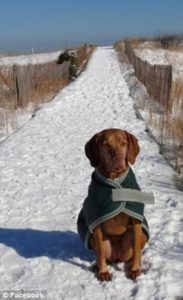 On March 17, after investigators determined who Allie belonged to, Whalen was charged with improper disposal of “trash,” and animal cruelty.

Feel free to weigh in on the situation – did Whalen commit an act of animal cruelty, or was it an act of compassion? Should it be illegal for an owner to shoot a dying dog? Is it different than an officer putting down a wild animal who has been gravely injured? Or a farmer who is putting down sick livestock? Feel free to comment below.

(Screenshot via Virginia Pilot and FB photo via Daily Mail) 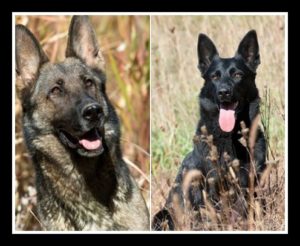