Children in Lee County, Alabama, were traumatized this past weekend when they stumbled across a horrifying situation by a creek in Beuregard at Steel Bridge. Thrown away like trash were the bodies of three deceased dogs, two pigs and several chickens, reported WRBL News.

The horrified children told their mom, who in turn reached out to the Lee County Sheriff’s Office. The authorities are now investigating the situation to see if a crime was committed. According to Lee County Sheriff Jay Jones, the dogs who were shot may have been chasing livestock and it is possible that they were killed by a farm owner – there are concerns that the animals could have been used in illegal animal fights.

Sheriff Jones stated, “Anytime we have an instance of this nature, we want to get to the bottom of it as best we can, and find out if there are some criminal elements involved, then we want to make sure that if that indeed is the case, we proceed as necessary.” 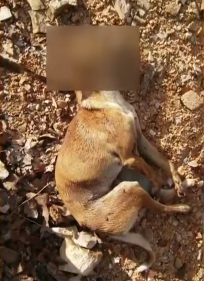 The mother of the kids who found the dead animals has set up a GoFundMe account to help find whoever is responsible for the deaths – the fundraiser states:

Plz help get these babies justice. These aren’t the only ones that have been killed and dumped in this area. I can’t do it alone and need help in catching these killers.

Puppy with cleft palate rescued off of Craigslist
Scroll to top