You are here: Home1 / News2 / animal cruelty3 / Ceremony held for K9 officer killed in the line of duty

On Friday, a ceremony was held for a K9 officer who was gunned down in the line of duty. Canine Rooster, a Belgian Malinois with the Witchita Police Department, lost his life on March 18 when he took a bullet fired from a gun held by 25-year-old Kevin C. Perry, reported Kansas.com.

Rooster was partnered with Officer Daniel Gumm, who credits the dog with savings his life. He expressed his gratitude to the dog who had worked for the department for five years, “Quite honestly, I owe my life to him.” 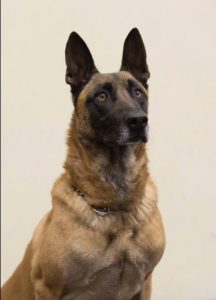 Perry and other officers were dispatched to a mobile home at 2320 W. MacArthur on the evening of March 18 after receiving a report that a man was threatening to kill a woman, and himself. The woman was outside of the residence when the officers arrived and shortly thereafter, Perry exited the residence. Officers observed a gun in the man’s waistband – Perry was ordered to drop his weapon, but he ignored the demand and tried to walk back inside of the home.

Rooster was dispatched in order to prevent the man from entering the residence – the dog grabbed hold of Perry’s leg and was shot by the man a short time later. Officers returned fire and the suspect received life-ending injuries.

Rooster is credited with helping to seize hundreds of pounds of marijuana, 10 pounds of meth and $31,000 in cash – he also helped his department with dozens of apprehensions.