A feral cat in North Bergen, New Jersey, somehow survived having his body impaled by an arrow. The cat, dubbed “Sparky,” was discovered late last week by Kelly Shannon, who was feeding feral cats in the area. According to ABC 7 News, despite the arrow through Sparky’s body, the injured cat remained “sweet and calm” with those who interacted with him.

Sparky was taken to the Animal Clinic of Bayonne for care – amazingly, veterinarians discovered that the arrow somehow missed his vital organs. A fundraiser was established to raise money to cover Sparky’s veterinary expenses…as of Thursday, over $2500 was donated for the injured cat. 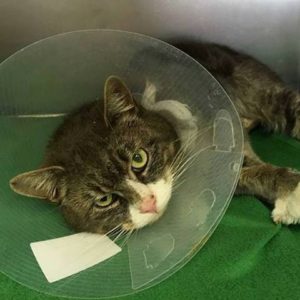 Sparky has a good deal of mending to do, but he is safe and receiving care – when he is healthy enough, he has a permanent home in Ohio to go to. Follow Sparky’s journey on Facebook here. Fundraiser here.