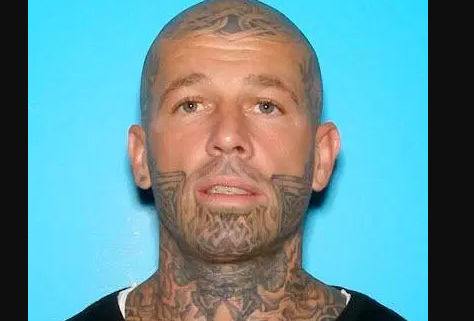 A man wanted for a machete attack on a woman and her dog has been captured. According to Monday’s MassLive, the suspect, identified as 45-year-old Thomas Vargus, was arrested in Pennsylvania on Sunday.

Vargus allegedly launched a vicious machete attack on a dog in Taunton, Massachusetts, on September 18. After the attack, the Taunton Police Department recounted the crime to Facebook followers:

As you may recall, on September 18, 2017 a male party attacked a dog outside of a residence in the area of 21 Church Street. Witnesses reported a male subject attacking a woman and her dog.
The suspect was described as a male party dressed in black with tattoos on his neck. When officers arrived the witnesses stated that the male party was screaming “I’m going to kill this ****ing dog. During the attack on the dog the owner was injured as well. The female victim sustained many wounds from the attack.

Acting on a tip, multiple agencies worked together to apprehend Vargus at a home in Marcus Hook. Vargus will be sent to Massachusetts to face his charges for assault and battery with a dangerous weapon and animal cruelty.

Prior article about this incident here.

Recently in the news: Shelter’s smiling dog results in a deluge of adoption applications