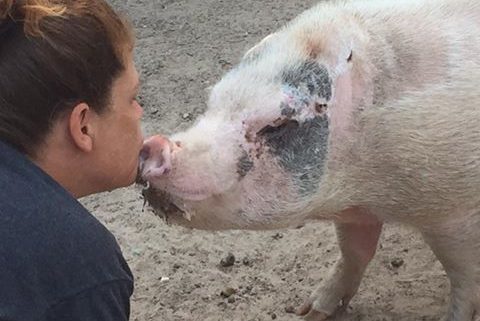 A pig, who was brutalized in horrifically cruel “hog-dog” fights, is finally living a peaceful, cruelty free life. His name is “Jude,” and prior to being taken in by Houston’s Mini Pig Rescue & Network, he was subjected to unbelievable pain and ongoing suffering.

According to the group, Jude was found alongside a busy road with “severe” injuries indicative of his use in the cruel blood sport. Meagan Se, a spokesperson for the group, told the Chronicle, “Both of his hind legs had bloody impressions from a rope being tied to them tightly as well as a bloody rope burn around his neck.”

Jude’s horrific life is over – today he has healed from his wounds and he is learning what is feels like to be treated with love and compassion. On August 12, the group caring for him wrote:

This boy has gone from a poor piggy that many people thought should have been euthanized, to a set and loving pig that can hear and is seeing better by the day!!! He has come so far in less than two weeks with a great vet and lots of love. Jude is a true testament to overcoming anything that tries to stop us.

He’s up and acting like a normal piggy now. Loves his safe, new life with us and is never going to feel pain or fear again.

Prior article about Jude here. 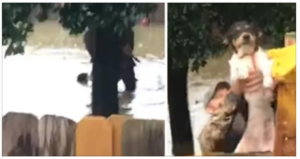 Veterinarian nurse poisoned own dog with insulin for ‘attention’...